Chimney Cricket - The Ins and Outs of Waterproof Roofing

The almost hypnotic sound of rain is soothing for many, but for homeowners who aren’t so sure about their roof’s weatherproof status, a routine thunderstorm can spell absolute disaster. As if a slow drip through the living room ceiling wasn’t scary enough, leaks can lead to everything from budget-busting repair bills to unsightly mold, to damage so severe it requires a total renovation. All these scenarios can be ably corrected by a knowledgeable contractor, but the smarter plan is to stop water in its tracks. How? It all starts with a little gadget called a cricket.

Crickets – Not Just an Insect Anymore

Utter the word cricket and most people are going to think about a small green creature well-versed in puppet-minding and show tunes, but in the construction world it’s the name of a small structure that sits on top of a building and diverts water. Crickets are generally pointy – think triangular – in shape and made to match the pitch of the roof, meaning they mimic the angle of the roof’s existing angles. Really, they look a lot like miniature roofs themselves. They can be installed almost anywhere, but typically crickets do their best work when they’re attached across transition areas (from one level of the roof to the next, across an addition, etc.) or around a projection like a chimney. 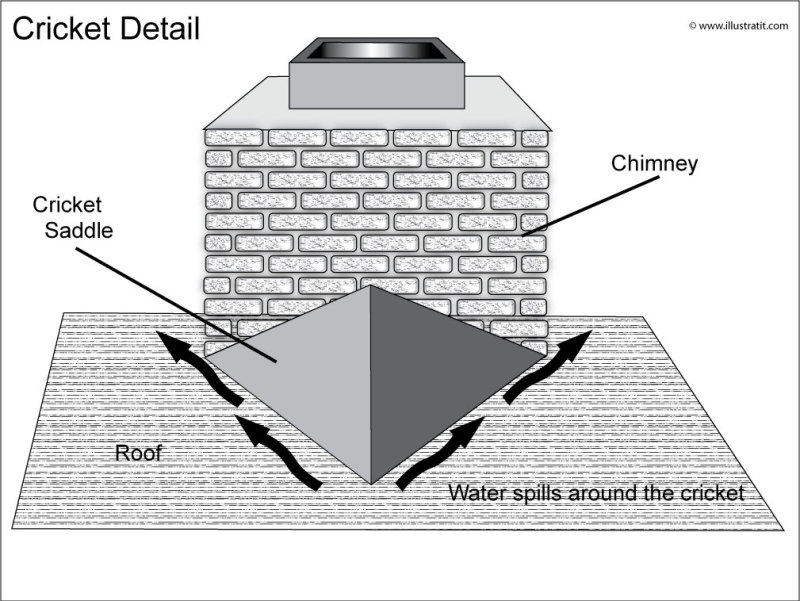 What Does a Cricket Do?

If you’re not familiar with the damage a day of rain can do to a roof, take a look at the sidewalk after a summer storm. All those puddles your dog and kids are so gleefully stomping through? Those same mini-lakes are sitting on your roof – the key word being “sitting.” With nowhere to go, rainfall collects on flat surfaces and just waits, hoping to be rescued by the sun’s hot rays. If evaporation doesn’t occur quickly enough, the water starts to misbehave. This is when you have to worry about warping, mold, leaks, and other “uh-oh” words no homeowner ever wants to hear coming out of their mouths. The angled shape of a cricket helps by diverting water flow so that instead of stagnant puddles, you have a trickle of rain water directed off your roof and/or into your gutters, where it’s whisked away to someplace less risky, like your thirsty garden or your neighbor’s lawn.

On the face of things, a cricket seems like a simple object easy to make and even easier to install. In reality, most of a cricket’s effectiveness is tied to whether or not it has been built, fitted, and put on your roof correctly. The pitch must be properly calculated, the material and fabrication must be right for the weather and temperature in your area, and, most of all, the joints must be flashed in order to prevent leaking.

Flashing is what contractors use to seal the edges and seams of a building and/or its attachments. Think of it like siding or shingles; you overlap the metal flashing and it forms a network of patches that are all but impermeable to the elements.

An experienced contractor such as Van De Steeg will install your roof crickets, flash the joints, and in a few simple yet skilled steps ensure your home – and all the residents therein – remains safe.